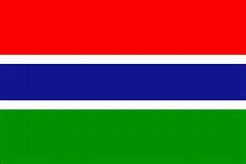 Small numbers of Africans travelled to Britain to contribute to the war effort. However, very large numbers fought in both wars at home against Britain's enemies in conflict and non-combatant war work.

According to the BBC; 'The First World War gave rise to a crucial change in the relationship between Europe and Africa. Over two million people in Africa made huge sacrifices for the European Allies. 100,000 men died in East Africa and 65,000 men from French North Africa and French West Africa lost their lives.'

'Britain's colonies in West Africa, Gambia, Sierra Leone, the Gold Coast (now Ghana) and Nigeria also served as staging posts and military bases during World War Two. Aircraft destined for the 'Middle East' and the North African front had to fly via West Africa , and were serviced there.
Ships bound for India and the east, unable to use the Suez Canal, had to sail via the Cape, and were serviced and victualled at West African ports. This, of course, necessitated the employment of vast numbers in war work, for example, in building and maintaining airfields and naval bases.
For example, the US military in Accra employed 6,000 men in construction and other war work. By December 1944 some 5,000 were enlisted in the West African Air Corps as groundcrew. A very small number served as aircrew with the RAF.'

The BBC comments on Britain's colonies in West Africa, Gambia, Sierra Leone and Ghana during World War 2, stating: 'Although Churchill lifted the colour bar, he sent telegrams to every Embassy and High Commission, telling them to find 'administrative means' to reject black volunteers. In the US, black pilots and doctors who had offered to volunteer were refused, as a result of this instruction...Generally, it was not thought appropriate for Africans or people of African descent [Britain's allies] to kill whites [Britain's mortal enemies] but this view didn't apply to Indians...'

The above serves to demonstrate the sentiment of the time, particularly of Britain towards those who were offering themselves sacrificially for service of 'King and country'. The present-day lack of readily available information celebrating their efforts indicates the longevity of such sentiment. It boggles the mind how the sacrifices of these precious lives could disappear from history. Join with us in our efforts to publicise, celebrate and pay homage to our West African allies and friends who served sacrificially in military conflict to defend British values and the freedoms we civilians enjoy. Lest WE forget!